Elijah’s mother Amanda died on December 18, 1877. I haven’t found a death record yet but assume she died in Anderson County. She was buried at Neals Creek Baptist Church Cemetery in Anderson along with the three Holland infants. Elijah was only five years old when she died.

On June 1, 1880, Elijah lived with his family in Broadway Township, Anderson County, South Carolina. His 11 year old brother, Brown, was listed as working on the farm. Nine year old Elijah didn’t have an occupation listed. As most of you know, sometimes the enumerator would make a note that the individual was “in school.”

The fall of 1883 brought death twice to the Holland family. Elijah’s sister, Eliza Ann, died on September 10 at the age of 27. His brother Thomas died on October 22 at the age of 12. Both most likely died in Anderson County. 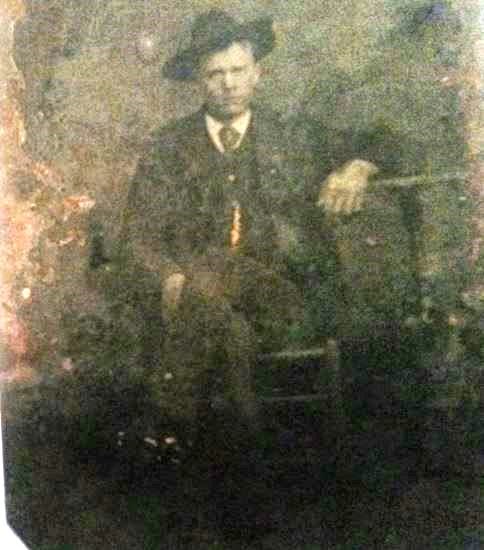 The spring of 1890 brought death twice again to the Holland family. On March 26, 1890, Elijah’s brother, William Harrison, died at the home of Jap Vandiver. He was 24 years old. Brown Lee died at the home of Mr. A. A. Carpenter on April 5 at the age of 21. Both died in Broadway, Anderson County. Brown had tended to Harrison during his illness and then came down with pneumonia immediately after Harrison’s death. Both were buried at Neals Creek Baptist Church Cemetery.

At the request of family members, in 1964 Aaron Hall Holland, Elijah’s half-brother, wrote a family history for the Holland and Hall families. In it, he tells of his family’s move from Anderson County, South Carolina to Whitfield County, Georgia. His father, Leroy, supported the family living off land inherited from his father, Captain John Holland. After John’s death in 1877, the land was divided and Leroy built a house on his part where he planned to raise his family consisting of 14 boys and girls. The land was poor and it was hard to make a living so Leroy was forced to borrow money from Elisha Shambley. Unfortunately he didn’t have the money to re-pay the loan so lost the land for non-payment. Now Leroy was faced with needing a place for his family to live so he contacted his friend George Brownlee in Dalton, Whitfield County, Georgia and made a deal to buy a tract of land which he agreed to make payments on. Leroy also bought 80 acres adjoining the Brownlee land which he paid cash for. Around January 1891, Leroy, second wife Amanda (Hall), and sons Elijah, Andrew, Charlie, Aaron, Lawrence, and Joe took a train from Anderson County to Atlanta where they spent the night. The next morning, they left for Dalton where they were met by Brownlee. Their household goods were held up for 15 days so they stayed with Brownlee at his home in Deep Springs. Once they finally moved to their land, Elijah’s brother Andrew found the work too tough and hitchhiked back to South Carolina.

A little over a year later, Elijah’s father Leroy died on May 4, 1892 in Beaverdale, Whitfield County, Georgia. He was buried at Deep Springs Church Cemetery in Dalton.

On June 14, 1900, Elijah, Janie, Roy, and Nellie lived in Hart County, Georgia. Elijah was a farmer. There was also an 18 year old boarder named Charley Williams living in the home. The enumerator listed Charley’s occupation as farm laborer so maybe he helped Elijah on the farm. The family lived seven houses from Janie’s sister, Sallie Dove Bowers and her family. Sallie and Janie’s mother Amanda lived with Sallie. The 1900 census record shows that Janie was the mother of three children, two of which were living. This census record entry is the only proof I have found of Elijah and Janie having had four children. The fourth child, Sam, wasn’t born until 1904.

Sometime between 1900 and 1910, the family moved back to Whitfield County. My aunt remembers hearing the story of Elijah and his family travelling to Dalton in a covered wagon.

My grandfather, Samuel Jackson Holland, was born in Whitfield County on October 13, 1904.

On May 4, 1910, Elijah, Janie, Roy, Nellie, and Sam lived in Whitfield County. Elijah was a farmer on a general farm. Janie, Roy, and Nellie helped out as farm laborers. Sam, only five years old gets to play. 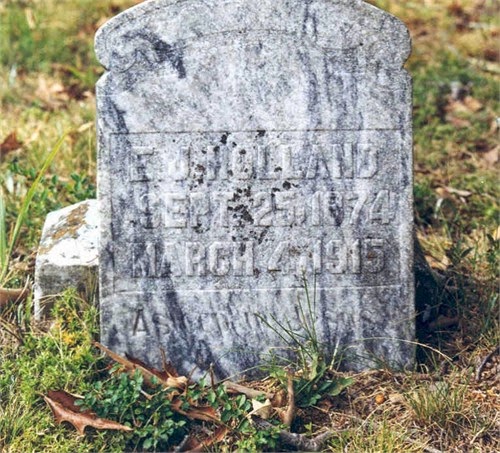 Two and a half months after the death of his stepmother, Elijah died on March 4, 1915 in Dalton. He was buried at Deep Springs Baptist Church Cemetery. His death was reported in the newspaper as “Elijah Holland, a highly respected resident of the Deep Springs section, this county, died last Thursday. Interment was made in Deep Springs cemetery Friday.”

Death’s always seemed to come in multiples for this family. Fourteen days after Elijah’s death, his brother Andrew died on March 18, 1915 in Washington, DC. Andrew was buried at Congressional Cemetery in DC.