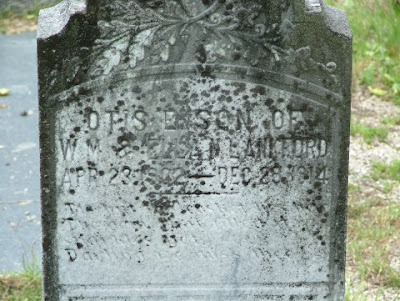 On April 20, 1910, Otis and his family lived in Bairdstown. His father was a farmer on a general farm. Tragedy stuck the Lankford family in 1914 when Otis died suddenly on December 29 in Bairdstown. The news articles below provide an accounting of his sudden death.

The Atlanta Constitution, December 31, 1914: Practical Joke That Caused Death to Boy, Athens, Ga., December 30.—(Special.) Thirteen-year-old Robert [sic] Langford, near Bairdstown, was shot and instantly killed by Hugh Arnold, a young man just grown, member of a prominent Oglethorpe county family. The boys are alleged to have been tricking young Arnold, who was returning from a call on a young lady, and he opened fire with an automatic pistol, with the above result.

Oglethorpe Echo, Friday, January 8, 1915: A MOST LAMENTABLE KILLING LAST WEEK AT BAIRDSTOWN—Young Man Fires Pistol Aimlessly and Kills a Boy Some Distance Away: One of the most lamentable affairs we have ever had to record occurred at Bairdstown on the night of December 28. A party of boys were out engaged in a common kind of mischief of rocking other boys that were calling upon some young ladies. Hugh Arnold, a son of Mr. Berrien B. Arnold, a young man about grown, knew of this mischief and hearing them at the mischief some distance away decided to “turn the joke” by firing off his pistol to frighten them. When he had shot twice one of the boys in the rocking party called to not to shoot any more as he had hit one of the party. The boy that was hit was Otis Lankford, a fourteen-year-old son of Mr. Will Lankford. The ball struck him in the head and he survived for only a few hours. Young Arnold was dumfounded that the shot from his pistol had found a mark among the party of boys. He says he had no idea that he was shooting even in their direction and shot merely to frighten them. The boys were not rocking him and he had no reason to shoot any of them. The shooting occurred just across the line in Greene county. Young Arnold has been arranged upon preliminary trial and bound over to the Superior court under a bond of four hundred dollars. The affair is one that is deeply lamented by the families of both the boys and their friends. From the best information we can get it is but an affair of thoughtlessness upon the part of the boys.

Eatonton Messenger, Eatonton, Georgia, January 8, 1915: Greene County: News reached Greensboro from Bairdstown that Otis Lankford, the young son of Mr. and Mrs. Will Lankford, died Tuesday from the effects of a pistol shot fired Monday night by Hugh Arnold, son of Mr. and Mrs. B. H. Arnold, prominent citizens of that section. From all accounts of the shooting, it appears that young Arnold was returning home in a buggy after calling on a young lady when several young boys began to rock him rather vigorously. Arnold drew an automatic pistol and fired into the crowd, young Lankford being shot through the head and dying in a few hours. The funeral and interment of young Arnold took place Wednesday afternoon at Bairdstown. An investigation was held and young Arnold placed under a $400.00 bond. 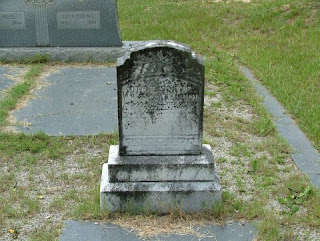 The theme for week 43 of the 52 Ancestors in 52 Weeks challenge is “Oops. An ancestor who made an “oops,” or one that you made while researching one of them. (We’ve all done it, believe me!).” This “Oops” happens to be a sad, tragic one.
Posted by Denise at 8:53 PM