Charlie never knew his mother. He had less than three months to spend with her before her death on December 18, 1877. She was buried at Neal’s Creek Baptist Church Cemetery in Anderson along with four children who died before her. Amanda, who was just 38 years old, had given birth to 11 children in 23 years. I don’t know what caused her death at such a young age but perhaps her body was just worn out. Charlie’s father Leroy didn’t stay a widower long—why would he with seven children to raise alone. On August 3, 1879, Leroy married Cindarilla Darliska Amanda Hall, daughter of Aaron Hall and Clementina Norris Hall, at the old home place in Anderson County, South Carolina. Leroy and Amanda would add three additional children to the family—Aaron Hall Holland, Lawrence Lafayette Holland, and Joseph Norris Holland.

On June 1, 1880, Charlie, his father, stepmother, and brothers Harrison, Brown, Elijah, and Andrew lived in Broadway, Anderson County, South Carolina. He was enumerated as Charles Holland that year. Charlie lost a sister in the fall of 1883 when Eliza Ann Holland died on September 10. She was buried at Neal’s Creek Baptist Church Cemetery.

The spring of 1890 brought death again twice to the Holland family. On March 26, 1890, Charlie’s brother William Harrison Holland died at the home of Jap Vandiver. Another brother, Brown Lee Holland, died on April 5. Both died in Broadway, Anderson County. The Anderson Intelligencer published the following article on April 10, 1890—Last week we chronicled the death of Mr. Harrison Holland, which occurred on the 25th ult., and now it is our sad duty to note the death of his younger brother, Mr. Brown Holland, who died last Saturday afternoon at the home of Mr. A. A. Carpenter, in Broadway Township. He had attended the bedside of his brother very closely during his illness, and on Sunday after the latter was laid away in the grave, he was stricken down with pneumonia, which gradually grew worse until death came. Mr. Holland was about 21 years of age, and was an upright, worthy young man, whose death is deeply regretted by a wide circle of friends. His remains were laid to rest by the side of his brother in the Neal’s Creek Churchyard on Sunday afternoon, Rev. C. B. Smith, of this city, conducting the funeral services.

After losing their land in the early 1890s, Leroy decided to give the family a new start and moved everyone to Dalton, Whitfield County, Georgia. He contacted a friend named George Brownlee there and made a deal to buy a tract of land from him. Leroy purchased an additional 80 acres adjoining the Brownlee land. Around January 1891, the Holland family took a train from Anderson County to Atlanta, Fulton County, Georgia. They spent the night in Atlanta and left the next morning for Dalton where they met Brownlee. Brownlee was kind enough to let the whole family stay at his home in Deep Springs for two weeks after their household goods were held up in transit from South Carolina. Once they moved into their new home, they settled in and went about the business of farming the land. Charlie’s brother Andrew was unhappy in Georgia and returned to South Carolina a short time after the move. He eventually moved to Washington, DC where he worked as a government clerk.

Leroy worked hard—cutting trees and clearing land—and the crops did well that first year. That was short-lived though when in late spring 1892, Leroy came down with pneumonia and died on May 4 in Beaverdale, Whitfield County, Georgia. He was buried at Deep Springs Baptist Church Cemetery in Dalton.

In January 1895, Charlie’s stepmother Amanda and his stepbrothers Aaron, Lawrence, and Joe moved to Alief, Harris County, Texas. They had come on hard times in Georgia after Leroy’s death and her brother Lawrence Peak Hall offered to furnish all of their food, free of charge, as well as a house and half of what they produced if they moved to Texas.

By the summer of 1900, Charlie had moved to the 10th District of Murray County, Georgia. On June 5, 1900 he was living in the home of Samuel and Mary Wheat as a lodger and working as a farm laborer. That year he was enumerated as Charles Holland. Samuel and Mary Wheat were the parents of Charlie’s future bride—Sarah Elizabeth Wheat. Both Charlie and Sarah (she went by Sallie) were single. Charlie and Sallie were married about 1901. Together they had two children—Thomas Glenn Holland in 1902 and Mary E. Holland in 1905.

On April 19, 1910, Charlie, Sallie, and their children lived with her widowed father Samuel Wheat in the 10th District of Murray County. Charlie and Sallie had been married for nine years according to the census enumerator. He was enumerated as William C. Holland that year and was a farm laborer.

On December 20, 1914, Charlie’s stepmother Amanda died in Houston, Harris County, Texas. She was buried at Italy Cemetery in Italy, Ellis County, Texas. Two months later, his brother Elijah died in Dalton on March 4, 1915. Elijah was buried at Deep Springs Baptist Church Cemetery. Two weeks after Elijah’s death, his brother Andrew died in Washington, DC on March 18, 1915. He was buried in an unmarked grave beside his infant daughter at Congressional Cemetery in Washington, DC.

Charlie registered for the World War I draft as Charles William Holland on September 12, 1918. He listed Sarah Elizabeth Holland as his nearest relative. Both lived in Crandall, Murray County, Georgia. Charlie was a self-employed farmer. He was tall and slender; he had blue eyes and brown hair.

On January 10, 1920, Charlie and his family lived on Dalton Road in the 10th District of Murray County. His 54 year old sister-in-law Susie Wheat lived with them. Charlie was a farmer on a general farm. He was enumerated as Charles that year. His son Thomas was working as a farm laborer on a home farm, probably helping his father. Charlie’s stepbrother Joseph Norris Holland died in Alief on February 26, 1920. He was buried at Alief Cemetery. His brother Marion Scott Holland died in Anderson, Anderson County, South Carolina on February 5, 1928. He was buried at Bethany Baptist Church Cemetery in Belton, Anderson County, South Carolina. 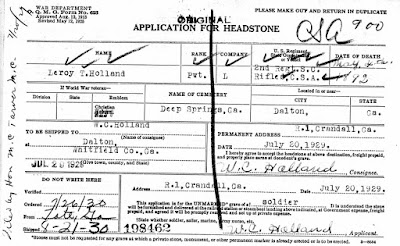 Charlie’s father Leroy served in Company L, Second South Carolina Rifles, Jenkins Brigade, C.S.A. during the Civil War and I’m sure Charlie heard many war stories before Leroy’s death in 1892. Charlie apparently wanted to honor his father’s military service and submitted an application to the War Department on July 20, 1929 for a headstone to mark his grave at Deep Springs Cemetery. It was shipped a year later and still marks his grave.

On April 15, 1930, Charlie and Sallie lived on Beaverdale Road in the 10th District of Murray County. He was enumerated as William C. Holland that year. His son Thomas, daughter-in-law Kathleen, their 25 year old daughter Mary, and Charlie’s sister-in-law Susie were all living with Charlie and Sallie. Both Charlie and Thomas were farmers.

On April 8, 1940, Charlie and Sallie lived with their son Tom and daughter-in-law Kathleen in the 10th District of Murray County. He was enumerated as William Charles Holland that year. He was unemployed. The highest grade he had completed was the 6th. Just two months after this census was taken, Charlie died at his home near Beaverdale on June 16, 1940. He was buried at Sumach Cumberland Presbyterian Cemetery in Crandall, Murray County.

Out of 14 children born to Leroy Holland, most died young. Only three lived past the age of 60—Charlie, Marion, and Aaron. 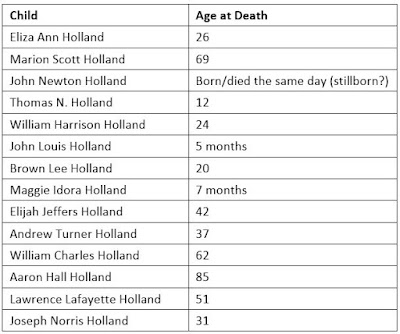