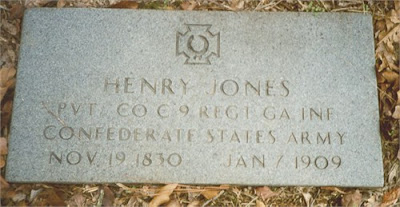 On September 18, 1850, Henry’s family lived in Division 88 of Walton County—but no sign of Henry. He would have been 19 years old in 1850, so he could certainly have left home by then. I’ve searched but can’t find him. He didn’t go far though as two years later, Henry married Sarah Elizabeth Tuck, daughter of Claiborne Tuck and Frances Moore, on November 7, 1852 in Walton County, Georgia. Together they had 10 children—Henry Clayborn Jones Jr., Martha Jane Jones, Elizabeth (Elisa) A. Jones, Bartow Jones, Midda A. Jones, Susanah A. Jones, James William Jones, Scion Jones, Elizabeth Jones, and Mary Jones. There was an 11th child according to the 1900 census record but I have yet to find that child listed in any other record.

On June 17, 1860, Henry, Sarah, and his three children—Henry, Martha, and Elizabeth (enumerated as Elisa) lived in the Northern Division of Monroe, Walton County, Georgia. He was a farmer with a personal estate valued at $110. His older brother Abraham lived next door and his parents lived two doors away. 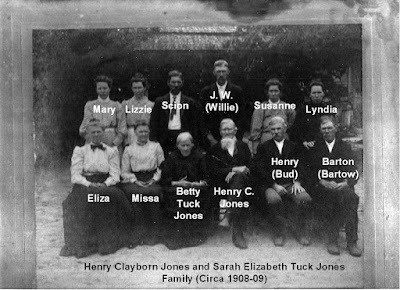 Henry served the Confederate States during the Civil War enlisting on June 13, 1861 as a private in Company C, 9th Regiment, Anderson Brigade Volunteers, also known as the “Hillyer Rifles.” Company C was commanded by Captain George Hillyer and engaged in the Battle of the Wilderness, fought in Virginia May 5–7, 1864. The Battle of the Wilderness was a blood bath with casualties heavy on both sides, including Henry who was shot under his left shoulder blade. The ball, which was never extracted, struck a rib and then lodged near his kidney leaving the left side of his body partially paralyzed. Henry frequently passed blood from his bladder as a result of his injury which affected his back and caused him to be in constant pain. He couldn’t straighten himself or sit down for long periods of time resulting in total disability from any kind of work. Henry survived the war though and was promoted to Full 2nd Sergeant before he mustered out at the surrender at Appomattox Court House in Virginia on April 9, 1865. Henry headed home from Virginia only to have his father pass away on June 13, 1865. I wonder if Henry even made it home before he lost his father. Burial took place in Between in what would become the Jones Family Cemetery. Henry’s mother Sarah died on June 8, 1866 in Walton County. She was buried beside her husband in the Jones Family Cemetery.

On July 22, 1870, Henry and his family lived in the Lindley’s District of Monroe, Walton County, Georgia. He was a farmer and worked the land. His son Henry Jr. worked on a farm as well, presumably helping his father. Henry’s home was valued at $200.

On June 8, 1880, Henry and his family lived in District 415 of Walton County, Georgia. At the age of 50, he had a full house now with nine children in the home. Still farming, sons Bartow and James were helping him work the farm.

Henry applied for and received a confederate pension in the amount of $50 from 1890 to 1906. It’s assumed that he received a pension until his death in 1909 but I haven’t found a record to prove that yet.

On June 18, 1900, Henry and Sarah lived in the Vinegar Hill District of Walton County, Georgia. At the age of 70, Henry was still farming the land. He and Sarah had three daughters still at home—Martha (45), Eliza (40), and Mary (23). The census record shows that Sarah was the mother of 11 children, 10 of which were living.

Henry’s daughter Martha never married and lived with her father until his death in Walton County on January 7, 1909. They buried Henry beside his parents in the Jones Family Cemetery in Between. Henry’s wife Sarah died just over a year after Henry on January 21, 1910 in Walton County. She was laid to rest beside Henry in the Jones Family Cemetery.

When Martha died in 1934, her obituary which was published in the Walton Tribune described Henry and his wife Sarah as “former prominent and highly respected Walton county citizens.” It was nice to see my 2nd great-grandparents described as such.

In the early 2000s, my father, husband, and I visited the Jones Family Cemetery where Henry, his wife, parents, and five unidentified individuals are buried. We had trouble finding the cemetery which is located on the side of Highway 78, near Sardis Church Road. In fact, we drove past it several times. Because it only contained a few stones and the area was overgrown, it just blended in. I remember a gas station being nearby. The stones were damaged, either by age or vandals. Then on June 18, 2006, the Walton Tribune published an article reporting on a gravesite restoration project for the cemetery. Steven Smallwood, a pastor at Harvest Baptist Church in Monroe at the time and a descendent of Henry Jones, took it upon himself in the fall of 2005, along with the help of his grandfather Joel Clayborn Jones, to restore the Jones Family Cemetery. He gave credit to the Sons of the Confederate Veterans for their work in maintaining the cemetery prior to the restoration project by periodically clearing out the weeds. The restoration project included adding a small brick wall around the cemetery and filling in the area with gravel. The gravesite was rededicated on August 5, 2006 with descendants of Henry Jones and three members of the Sons of the Confederate Veterans (SCV) present for the ceremony. The SCV gave a brief history of Henry’s military service during the Civil War and then gave him a six gun salute. Pastor Smallwood told the crowd of Jones descendants that the Jones family owned hundreds of acres along Highway 78 in Walton County at one time. He also told the crowd that Henry was a Christian man who was the church clerk at Double Springs Baptist Church in Bold Springs, Walton County, Georgia. Afterwards they all met at Harvest Baptist Church for a Jones family reunion and took a group and individual family photos to record the event. I wish I could have attended! I’m sure Henry would have been honored to know that his descendant cared enough to restore his final resting place. I appreciated that he did.

On a side note, Between is such an odd name for a town that I had to look up its origins. According to Wikipedia, “The town is called Between because it is between two of Georgia’s largest cities—Atlanta and Athens are almost exactly equidistant to Between. It is also between Walton County’s two largest cities, Loganville and Monroe.”