On April 8, 1930, five year old J.B. lived with his family on Cleveland Road in Dalton, Whitfield County, Georgia. His father was a farmer on a general farm. It was a three generation household with his grandparents, John E. and Rachel Vineyard, living with them. J.B.’s grandmother Rachel did needle work on bedspreads. I found a surprise connection living next door to the Shields family—John M. Overton and his wife Chunia. John was the son of Abijah Overton and Elizabeth Ann Rhodes, my paternal 3rd great-grandparents.

On April 14, 1940, J.B.’s family, including his Vineyard grandparents, still lived in Dalton. His father was now a station manager at a service station. The highest grade J.B. had completed was the 7th. 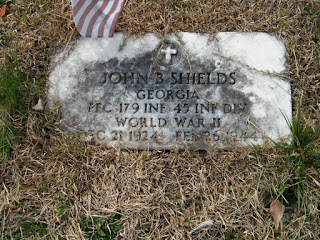 World War II was still raging during the summer of 1943. J.B. had completed one year of high school. When not in school, he was a farm hand on a general farm. Now 18 years old, J.B., like many young men of his generation, made the decision to serve his country and headed to Fort McPherson in Atlanta, Fulton County, Georgia. On June 1, he enlisted as a private in the U.S. Army. His service to his country was short-lived though when, at the young age of 19, J.B. died in Anzio, Italy on February 26, 1944 as his landing barge came ashore in combat during the Battle of Anzio, a campaign that lasted from January 22 to June 5, 1944. J.B. was buried at West Hill Cemetery in Dalton. His name is listed on a memorial plaque at the Georgia War Veterans Memorial Complex commemorating Georgians who died in World War II. The complex is located at the Floyd Veteran Memorial Building in Atlanta.