Nellie Holland, daughter of Elijah Jeffers Holland and Cornelia Jane (Janie) Dove, was born October 4, 1898 in Hart County, Georgia. She was the second child of four—Roy, Nellie, and Samuel Jackson Holland. There was a fourth child, born and died before June 14, 1900 according to census records for that year. The enumerator recorded Janie as the mother of three children, two of which were living. This census record entry is the only proof I have found of Elijah and Janie having had four children. The fourth child, Sam, wasn’t born until 1904. Nellie was my great-aunt.

I’ve blogged about Nellie in the past, before I started the 52 Ancestors challenge. This blog post will fill in the rest of what I know about her.

On June 14, 1900, Nellie lived with her family in Hart County, Georgia. Her father was a farmer. There was an 18 year old boarder named Charley Williams living in the home. The family lived seven houses from her aunt, Sallie Dove Bowers and her family. Nellie’s grandmother Amanda Holland Dove lived with Aunt Sallie.

Sometime between 1900 and 1910, the Holland’s moved back to Whitfield County. My aunt remembers hearing the story of them travelling to Dalton in a covered wagon.


On May 4, 1910, Nellie lived with her family in Whitfield County, Georgia. Nellie was enumerated with an occupation of farm laborer.


Nellie’s father Elijah died on March 4, 1915 in Dalton, Whitfield County, Georgia. He was buried at Deep Springs Baptist Church Cemetery in Dalton. His death was reported in the newspaper as “Elijah Holland, a highly respected resident of the Deep Springs section, this county, died last Thursday. Interment was made in Deep Springs cemetery Friday.”

On January 30, 1920, Nellie, her mother Janie, and youngest brother Sam lived in the Ninth District of Whitfield County. Nellie was able to read and write. She was a farm helper on a home farm.

On January 6, 1921, the Dalton Citizen reported “Miss Nellie Holland, who has been indisposed for some time, is convalescing.” This was short-lived though. The death angel, who always seemed to linger nearby in the Holland household, came and took Nellie at home the morning of May 6, 1921 in Varnell, Whitfield County, Georgia. She was 22 years young—gone too soon. Her death certificate recorded tuberculosis, which she’d had two to three years, as the cause of death. Nellie was buried later that day at Deep Springs Baptist Church Cemetery in Dalton beside her father Elijah, brother Roy, and grandfather Leroy Thomas Holland. Her brother Sam was the informant on her death certificate.

On March 3, 2015, the Digital Library of Georgia released the North Georgia Historic Newspapers Archive covering the years 1850–1922. Having roots in north Georgia, I spent that evening searching for ancestors and quickly found an article written by Nellie’s cousin, Ursula G. Bowers Ledford, after Nellie’s death. Ursula, or Sula as she was apparently called, was the daughter of Sallie M. Dove. Sallie was Janie Dove Holland’s sister making Nellie and Sula cousins. The families lived near each other and it appears they were close. I thought this news article that ran in the Dalton Citizen on May 12, 1921 was sweet and wanted to share it.


In Memoriam. On the morning of May 6th, just as the sun was peeping over the mountain top, the white-robed angel entered the home of Mrs. E. J. Holland and took away the spirit of her daughter, Nellie.

Oh! how sad the parting, but how sweet the meeting will be when we all gather on the other shore.

How often have I met Nellie with her smiles and sweet words. Nellie was sweet and good to all alike. She had been sick seven months. Oh! how we did long for her recovery, but God saw fit in His power to take her into His care. To know her was to love her.

Little did we think we would have to give sweet Nellie up so soon; but death will overtake us all. The rich, the poor, the good, the bad have that debt to pay sooner or later.

Can we bear our troubles? Yes, for our Master never puts more on us than we can bear. We say, “Weep not, dear mother and brother, for your dear daughter and sister, for she is out of her suffering.” Let us all live a Christian life that we may meet sweet Nellie on that bright shore.

Nellie was a true Christian. She joined the Baptist church at Deep Spring in 1918, and lived a Christian life. She was only 22 years of age—just in the prime of life.

She was laid to rest in the Deep Spring cemetery. Mr. Henry conducted the funeral.

Written by her cousin who loved her, Sula Ledford, Varnell, Rt. 1. 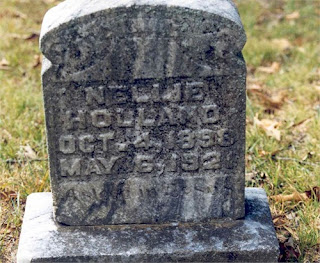 The family had to dig deep and rely on their faith to get through another death in the family. It had to weigh heavy on their hearts. My grandfather hardly spoke about his family. You can’t blame him—too many sad memories to re-live.

Nellie did general housework for a living and played the organ at Deep Springs Baptist Church. She didn’t marry and never had children. I see my Aunt Barbara’s face when I look at a picture of Nellie.
Posted by Denise at 8:47 PM