When Edward was 15 years old, his two year old sister Tabitha died in 1898. She was buried at Anderson-Bethel Cemetery in Littleton, Wetzel County, West Virginia.

On June 22, 1900, Edward lived with his family in the Clay District of Littleton. He was enumerated as Ed.

On April 27, 1910, Edward and his family still lived in the Clay District. He was a teamster in an oil field.

On May 4, 1912, Edward married Cassandra Rebecca Kennedy, daughter of Franklin Scott Kennedy and Edna Elizabeth Booth in Logansport, Marion County, West Virginia. She was listed as Catherine Kennedy on the marriage certificate so I can’t be 100 percent sure this is the correct marriage but I feel good about it. The West Virginia Division of Culture and History website has free online birth, marriage, and death records so I searched on “Murphy” and “Kennedy.” The search results contained eight records with Ed Murphy and Catherine Kennedy appearing to be the logical choice. And, the marriage occurred in Marion County, which is where they lived. As far as I can tell, Edward and Cassandra never had children. 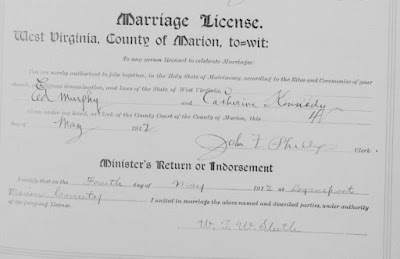 Edward’s sister Essie died in Warwood, Ohio County, West Virginia on May 25, 1915. I have yet to find her burial location.

On January 13, 1920, Edward and Cassandra lived in Mannington. His occupation was “laborer/drives team.”

Edward’s mother died in Littleton on April 1, 1927. Five days later on April 6, his father died in Mannington from a cerebral hemorrhage. Both of his parents were buried at Anderson-Bethel Cemetery in Littleton.

On April 8, 1930, Edward and Cassandra lived on Rymer Road in Mannington. She was enumerated as Cassie. Edward owned his own home which was valued at $800. He was a laborer doing road construction.

Pearl Harbor was attacked in December 1941 and America became entrenched in World War II. Although an old man of 58 (Siri tells me the life expectancy of a man in 1942 was 62.3 years), Edward registered for the World War II draft in April 1942. He listed the person who would always know his address as his wife, Cassie R. Murphy. They lived in Mannington at R.F.D.I. and did not have a telephone. Edward’s occupation was “self-employed cutting props” in Mannington. That summer, his wife Cassandra died of cervical cancer in Mannington on July 31, 1942. She was buried at Gill and Haught Cemetery, a small family cemetery in Rymer, Marion County, West Virginia. Cassie was just 49 years, 5 months, and 13 days old. The decade ended with the death of two of Edward’s brothers—Arliff who died in Wolf Summit, Harrison County, West Virginia on July 11, 1947 and Charles who died in Littleton on November 16, 1949. Arliff was buried at Anderson-Bethel Cemetery in Littleton and Charles at Thomas Chapel Cemetery in Wetzel County. 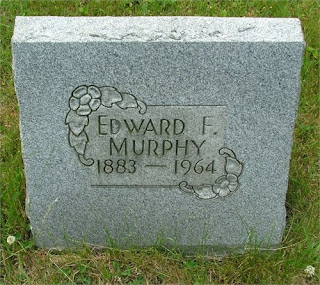