On June 1, 1900, Jessie and her family lived in Woodville, Greene County, Georgia. The census enumerator listed her birthdate as October 1882. Charles C. Davison, a member of the prominent Davison family of Greene County, lived two doors away.

On April 20, 1910, Jessie, Brice, and their one year old daughter Mary Lou lived on Watson Spring Road in the Branch division of Greene County. Brice was an overseer on a farm. There were two servants living in the home, John Jorden and Willie Cosby, both farm laborers.

Jessie’s mother died of Bright’s disease in Penfield on March 26, 1919. She was buried at Penfield Cemetery beside her husband. Jessie was the administratrix of the estate—a “large estate of real and personal property, worth the sum of five hundred ($500) dollars.” Jessie applied to sell the land in Penfield on June 9, 1919. The petition showed that Mary Lankford’s estate consisted “of a tract of land in the Village of Penfield, Greene County, Georgia, on northeast corner of Evans Gresham lot, bounded north by Main Street, East by thirty feet street and lot of Mrs. Barnhart, south and west by Evans Gresham lot, formerly owned by Penfield Hosiery Mills.” Jessie sold the land for $600 to pay her mother’s debts and then distributed the remaining money among her mother’s siblings.

On January 30, 1920, the Barnhart family lived in Penfield. Brice was a farmer on a home farm and Jessie a housekeeper. Her brother, Vincent Thomas Lankford Sr. and his family lived four houses away.

On April 23, 1930, Jessie and her family still lived in Penfield. Her widowed aunt, Nannie Lankford, aged 77, lived with them. Aunt Nannie must have been the wife of her Uncle Nathan Lankford, the only male child of her grandparents besides her father James. Nathan is still a mystery to me. I don’t have much information on him at this point. But I did find a marriage record for a Nathan Lankford who married Mary Moore in Greene County. So it’s a good chance Aunt Nannie was Mary, but that needs to be proven.

On April 13, 1940, Jessie and Bryce lived in Penfield. The highest grade Jessie had attended in school was the 7th. The census enumerator spelled their last name as Barnheart.

About 1946, Jessie and Bryce moved to Greensboro, Greene County, Georgia to be near their daughter. 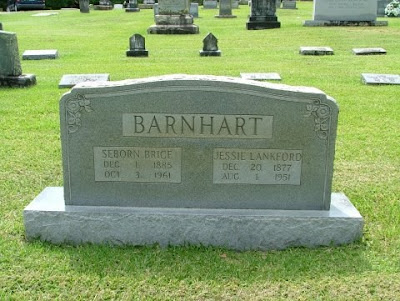 Jessie died at home in Greensboro on August 1, 1951. Her funeral was held at McCommons Chapel with the Rev. F. A. Kilgore and the Rev. Sewell Dixon officiating. She was buried at Penfield Cemetery on August 2. The Herald Journal ran her obituary on August 10, 1951 reporting that Jessie had been ill for 10 days prior to her death. It further reported that Jessie had a happy childhood spent near Penfield, where she continued to live after her marriage. Jessie was very involved in the Baptist Church and spent “a lifetime of service in the work of her Master.” She frequently entertained ministers in her home and was actively involved with her church until declining health prevented her from doing so. Jessie was devoted to Bryce and Mary Lou and full of love for her friends. She could always be counted on to help others. One of her greatest pleasures was growing flowers, which she shared with friends. Jessie was survived by her husband Bryce, daughter Mary Lou Barnhart Jackson, a grandson Grady Jackson, Jr., three sisters, Della McCollum of Smyrna, Cobb County, Georgia, Mary Callaway of Greensboro, Alice Callaway (who died four months later on December 5, 1951), of Union Point, Greene County, Georgia; and three brothers, Nathan Lankford of Union Point; Vincent Lankford of Greensboro, and Oliver Lankford of Atlanta, Fulton County, Georgia.

Did you notice that this was blogpost number 52? That means it completes my first year of Amy Johnson Crow’s 52 Ancestors challenge. I know, it’s only September so how could it be week 52. Well, I joined in late last year. I didn’t find Amy’s challenge until August 2014 and then I spent a couple of weeks thinking about whether I wanted to accept it or not. I don’t consider myself a writer so I wasn’t sure how it would go. But I decided it would be a worthwhile project to tackle. At the time, my father-in-law was living with us. His health was declining rapidly so we were pretty much homebound with him. The challenge gave me something to do while we sat with him in the evenings. Early on I decided that I would write in a timeline format—beginning with birth and ending with death. For every blogpost, I check to see what information I already have for an ancestor. Then I search www.ancestry.com to see what new information I can find. I also got a little help from Mama and my Aunt Barbara. Along the way, I’ve discovered new information, corrected mistakes previously made in my research, and hopefully not made any new mistakes. It’s been a fun project and now I’m looking forward to year two!
Posted by Denise at 9:30 PM