Donald Roy Church, son of Robert Church and Lucinda Murphy, was born May November 8, 1898 // correction made on Feb. 11, 2017 -- Donald's just found obituary and funeral card show that he was born in November, not May // in Littleton, Wetzel County, West Virginia. He was one of 13 children—George Church, Samuel C. Church, James Benton Church, Jennie F. Church, Anna B. Church, Dessie Church, Charles Cleveland Church, Martha Church, William Henry Church, Donald Roy Church, and Presley Church. Two children are unknown to me but enumerated in the 1910 census record. They most likely didn’t survive infancy.

On June 9, 1900, Donald and his family lived in the Church District of Wetzel County. He was enumerated as Roy D. Church. His father was a farmer. Donald’s brother George had apparently died before the census taker came around as the census record shows that Lucinda was the mother of 11 children, 10 of which were living.

On April 28, 1910, Donald and his family lived in the Clay District of Wetzel County. Again he was enumerated as Roy D. Church. Only five children were still at home—Dessie, Martha, Henry, Donald, and Presley.

On September 12, 1918, Donald registered for the World War I draft at the age of 19. He was a laborer for Pitts West Virginia Gas Company in Littleton. He listed his father Robert Church as his nearest relative. Donald was of medium height and build; he had blue eyes and brown hair.

The 1920s brought a lot of change to Donald’s life. On January 15, 1920, he was unemployed and still living at home. His sister Dessie, her husband Charles Homer Murphy, and her first born son Ralph lived next door. Donald married Fay Rhoda Heater, daughter of Ezra Heater and Olive Belle Sandy, in Harrison County, West Virginia on July 5, 1924. There was a six year age difference between the two of them. On October 24, 1924, Donald became a father when he welcomed daughter Pauline into the family, the first of three children. They ended the decade in 1929 living at 127 Charles Street in Harrison County. By then, Donald was employed as a welder.

On April 19, 1930, Donald, Fay, and Pauline lived in a rental home on Charles Street in Clarksburg. Donald was a welder in a carbon factory. By 1931, they had moved to a home at 139 Haymond Highway in Clarksburg. The 1930s would be a sad decade for the Church family. Donald’s brother Samuel died on June 22, 1931 at age 50 in the Church District of Wetzel County. His father Robert died on November 29, 1932 in Littleton. His mother, Lucinda died on January 13, 1933 in Littleton, less than two months after his father. All three were buried at Thomas Chapel United Methodist Church Cemetery in Glover Gap, Wetzel County, West Virginia, near the town of Hundred. Donald’s sister, Martha Church McIntire, died in Clarksburg on August 6, 1936. She was buried at Elkview Cemetery in Clarksburg beside her two husbands, brothers Lester and Chester McIntire.

Sometime between 1930 and 1936, Donald and Fay moved to Niagara Falls, Niagara County, New York. It was there that their second child, Donald Kenneth Church, was born on August 27, 1936. This move was a surprise to me. In all the conversations I had over the years with my father-in-law about his family, he never mentioned his Uncle Donald living in New York. This would explain the photo of Donald, Fay, and Dessie taken in front of some large falls.

By the time 1940 rolled around, Donald and Fay had moved back to Clarksburg and lived in a home at 314 Maryland Avenue. Donald’s sister Dessie died in Littleton on November 20, 1940. She was buried at Thomas Chapel Cemetery beside her parents. By 1942, Donald and Fay had moved to 402 Maryland Avenue. This is probably where their third child Garry David Church was born on December 12, 1942. By 1948, they had moved again and lived at 308 Pennsylvania Avenue in Clarksburg. Donald continued earning his living as a welder during the 1940s, a career he began in the late 1920s.

Still living in Clarksburg in 1960, Donald was a painter at Waldo Hotel which was located at West Pike and North 4th Streets. According to Wikipedia, the Waldo Hotel “was once the social center of Clarksburg. In its day it was a gathering place for parties, weddings, civic meetings and social events. It was known as one of the world’s most luxurious hotels.” The city directory listed Donald and Faye’s home as Pike (A) so perhaps they lived close to the hotel.

Donald’s sister Jennie died on February 26, 1963 at Weston State Hospital in Weston, Lewis County, West Virginia of a cerebral hemorrhage and arteriosclerosis. She was buried beside her parents at Thomas Chapel United Methodist Church Cemetery. His brother James died on August 9, 1969 in Salem, Columbiana County, Ohio. He was buried at Hope Cemetery in Salem. Donald’s brother William Henry Church died on April 7, 1971 in Wetzel County. He was buried at Thomas Chapel with his parents and several siblings.

Donald died on November 10, 1983 in Clarksburg. He was buried at Floral Hills Memorial Gardens in Harrison County. His last surviving sibling, Presley, died in 1984. 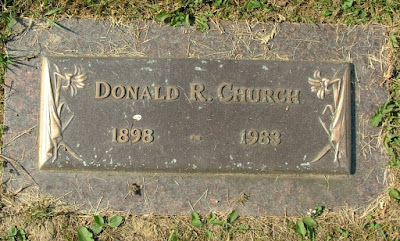 Donald is a descendent of Henry “Old Hundred” Church for whom the town of Hundred was named.
Posted by Denise at 10:02 PM