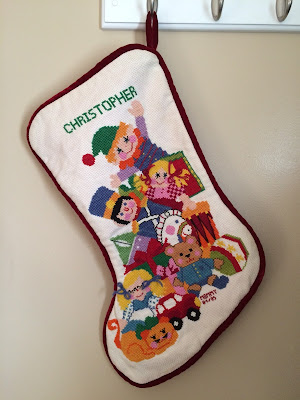 Today’s blog post won’t be a timeline of an ancestor’s life. Instead, I thought I’d share the story of my oldest son’s Christmas stocking—one of our newer family heirlooms.

Christopher was born in January 1984. At the time I did cross-stitch in my spare time so decided to make him a Christmas stocking. I hadn’t been doing cross-stitch for long and don’t think I really knew what I was getting into. If I had, I might not have started the project. It was a big project for a new mother and full-time working woman. But I didn’t let that stop me and got started that same year. As you can see from my signature in the photo below, it took two years to finish the stocking. Now that I look back, I wish I had signed it with my actual name instead of “Mommy” and added the “19” in front the “84/85.”I’ll consider that a lesson learned. Anyway, once the cross-stitch part of the project was finished, it was time to figure out the next step—turning it into a stocking. I didn’t sew so what was I thinking! But as luck would have it, my office mate Evelyn did. Another hobby I had at that time was making and painting ceramic Christmas ornaments. So Evelyn and I made a deal—I would make her 12 ceramic Christmas ornaments and she would turn my work of art into a stocking. Then I had to figure out what kind of material to use for the back and lining of the stocking. Again, as luck would have it, my co-worker and still friend Jan had an old red velvet dress lined with red satin which she contributed to the project. So Evelyn and I both got busy—she began sewing and I started pouring, cleaning, and painting the 12 ornaments. By the time Christmas rolled around in 1985, we had a beautiful stocking for Chris and it still hangs in our house today.

My youngest son Kevin was born in 1987. Of course, I thought about making a cross-stitch Christmas stocking for him as well. By this time though, I was just too busy raising two children and working full time. I had good intentions and actually bought a pattern and material to make the stocking—but it still sits waiting to be made. I eventually bought a “temporary” stocking for Kevin. I purposely picked one that was larger than Chris’ hoping that would make up for it not being handmade. We’re still using that stocking for Kevin and I feel a little guilt every year when pull it out of the box and hang it. Hopefully he doesn’t hold that against me!