It’s Christmas day—a special day to spend with family, but also a bittersweet day for me. Christmas Day 2006 was the last time I saw and talked to my mother-in-law, Mary (Athya) Murphy. She suffered from emphysema and was in the final stages of the disease that year. We knew her time on Earth was drawing to a close. On Christmas morning 2006, we made the hours’ drive to my in-laws house to spend the day with the two of them. We arrived mid-morning and found Mary still in bed, not wanting to get up. Rather than forcing her out of bed, I pulled up a chair, sat down, and put her hand in mine. We talked when she felt like it and sat quietly holding hands when she didn’t. Eventually, my father-in-law convinced her to get up and she moved into the living room to join the rest of the family. It was obvious though that she wasn’t in any shape to celebrate the joyous day. She was incoherent part of the day, hallucinating at one point—having a conversation with presidents from the 1800s when she was actually talking to my youngest son and me. When we left their house that night I knew in my heart that she wouldn’t make it through the night. I prayed for her at bedtime, asking God to end her suffering. He must have heard my prayers because she passed away early the next morning.

Last night after dinner, I sat in my chair gazing at all the ornaments on the Christmas tree. Each one has a memory attached to it, including one I made for Mary many years ago. I knew then that my last blogpost of the year would be to share the story of the special ornament I made for Mary. 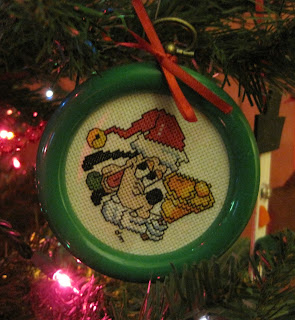 We once got into a heated discussion as to whether Disney’s Goofy was a dog or a horse. She was adamant that he was a horse and I told her she was crazy, that of course he was a dog. We argued and argued about this until I finally decided to end the argument and wrote a letter to Disney asking for their help. I knew they were the only people that could end this argument. Disney responded by sending me a copy of Goofy’s bio—yes, Goofy has a bio—stating in no uncertain terms that he was a dog. There was my big “I told you so” moment! Feeling the need to gloat later that year, I cross-stitched a Christmas ornament for Mary featuring Goofy wearing a Santa hat and ringing a bell and gave it to her for Christmas. We had a good laugh when she opened her gift and then every Christmas when it came time to hang Goofy on her tree.

I was fortunate enough to have a mother-in-law that I loved. I know many people can’t say that but I honestly can. I was happy to inherit the ornament after her passing and now I smile every year when hanging the ornament on my tree of memories.
Posted by Denise at 1:10 PM