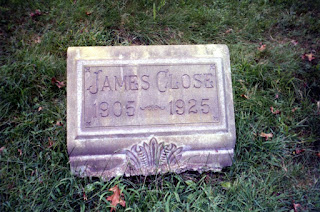 James was only seven years old when he and his family left his home in Scotland on May 8, 1912 departing from the port of Glasgow via steerage on the S.S. Grampian, Allan Steamship Line. They arrived in Quebec, Canada on June 16. On the outward passenger list, they declared that their “Country of Intended Future Permanent Residence” was Canada. James’ father was a miner so upon arrival in Canada, they settled at Joggins Mines in Nova Scotia where they lived for two years.

In 1914, James’ father left the family behind in Nova Scotia and traveled to America, arriving on July 9, 1914 via Class D at the Port of Vanceboro, Maine. From there, he traveled to Steubenville, Jefferson County, Ohio where he joined his uncle, William J. McCandler. James, his mother, and his sister left Nova Scotia in November 1914 to join his father in Steubenville. They arrived in America via the Port of Buffalo, New York on November 8, 1914. Immigration papers record the address they were going to as 320 Reserve Avenue in Steubenville and that they planned to stay there permanently. His grandmother, Jemima Athya of Garndale Road in Glasgow, Scotland, was listed as his nearest relative “in country whence alien came.” James had a fair complexion, brown hair, and blue eyes.

James’ uncle David Athya, who served as a private in the Second Highland Light Infantry during the Great War, was killed in action at France and Flanders on May 10, 1915. David’s name is inscribed at the Le Touret Memorial in Pas de Calais in France.

James’ brother, John Jr., was born in Steubenville on July 30, 1917. He was the only Athya sibling born in the United States.

On January 22, 1920, James lived with his family in Steubenville. He was able to read and write and had recently attended school. The census enumerator listed him as an “Alien.” A family friend named Della L. Harvis, age 51 and divorced, lived in the home. A student in 1921, James lived with his parents at 641 Grandview Avenue in Steubenville. He still lived there in 1924. Both he and his father were tinworkers. 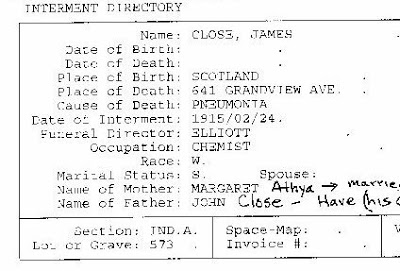