The 52 Ancestors theme this week is “Road Trip: Any epic “road trips” in your family tree? Which ancestor do you want to take a road trip to go research?” I’ve made a few road trips to research my family in Georgia but the one that came to mind first was a road trip we made several years ago to West Virginia with my father-in-law, Earl Murphy. He was from Littleton, Wetzel County, West Virginia and I happened to be working on his lines at the time so asked him to let us take him “home.” I wanted him to show us where he grew up and hear the stories that might be sparked by the trip. I also had a long list of people I wanted to visit at the Wetzel County cemeteries. His sister-in-law lived in Bridgeport so we planned to spend one day with her, one day in Wetzel County to meet up with his brother/visit cemeteries, and a third day visiting cemeteries in Harrison County. We spent a lot of time on the road but it was fun. My father-in-law was upset when he saw the ruins of the bank and other buildings in Littleton. The countryside was just beautiful. His sister-in-law had a wealth of knowledge to share about the family and she also knew where the cemeteries were so we didn’t have to waste time trying to find them. I was fascinated by the cemeteries there and how people were buried on the hills. Of course, we often found the graves we were looking for at the top of one of those hills.

One of the graves we visited was that of Presley Church, my father-in-law’s uncle. He often talked about Presley. Unfortunately I wasn’t smart enough to take notes so I can’t share any personal memories of Presley or his family—just the facts from my research. I do know I only heard good things about him.

Presley Church, son of Robert Church and Lucinda Murphy, was born September 29, 1900 in Littleton, Wetzel County, West Virginia. He was the youngest child of 13—George, Samuel C., James Benton, Jennie F., Anna B., Dessie, Charles Cleveland, Martha, William Henry, Donald Roy, and Presley. Two children are unknown to me but enumerated in the 1910 census record. They most likely didn’t survive.

On April 28, 1910, 10 year old Presley lived with his family in the Clay District of Wetzel County, West Virginia. His father Robert was a farmer.

According to Presley’s Delayed Certificate of Birth filed in the state of West Virginia, he attended Sugar Grove School in Wetzel County in September 1911.

On January 15, 1920, Presley lived with his family in the Clay District of Wetzel County. The enumerator recorded his age as 18, which should have been 19 having been born in September 1900. Presley was able to read and write. His sister Dessie, her husband Charles Homer Murphy, and their son Ralph lived next door.


On April 7, 1930, Presley, his wife Nellie, and daughters Betty and June rented a home on U.S. Route No. 250 in the town of Littleton. Presley was an operator at an oil and gas company. He was 23 and Nellie 19 when they married. They lived three doors from his sister and brother-in-law Dessie and Charles Murphy and their five children—Ralph, Evelyn, Raymond, Glenn, and Earl.

On April 17, 1940, 39 year old Presley, his wife Nellie, and daughters Betty, June, and Doris Jean lived in Littleton. Presley had an 8th grade education. He worked 40 hours a week for an oil and gas company.

During the period 1946 to 1954, Presley’s daughters married and moved out of the house. June married Billy Joe Daniel in 1946 and moved to Rome, Floyd County, Georgia where she would live the rest of her life. Betty married John David Watters in 1952 and Doris Jean married Calvin Grey Harris in 1954. Both Betty and Doris Jean lived in Charleston, Kanawha County, West Virginia after they married.

Presley retired from the Equitable Gas Company in Littleton. He was a member of the United Methodist Church, also in Littleton. They lived in a house near the railroad tracks in Littleton. My husband remembers visiting Uncle Presley as a child and having to hold his nose when he drank water the sulfur smell was so bad. 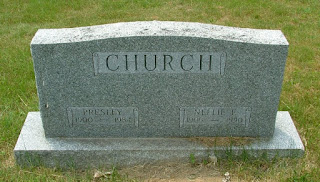 Presley died at the age of 84 on December 21, 1984 at the Charleston Area Medical Center in Charleston, Kanawha County, West Virginia. He was survived by his wife, Nellie; three daughters, Betty Watters and Doris Jean Harris, both of Charleston, and June Daniel of Rome, Georgia; six grandchildren; and eight great-great-grandchildren. His funeral service was held at 10 a.m. on December 24, Christmas Eve, at the Hunt Funeral Home in Hundred, Wetzel County, West Virginia. Presley was buried at Anderson Bethel Cemetery in Littleton.